AIN'T TOO PROUD: The Life and Times of The Temptations 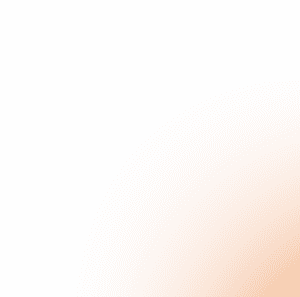 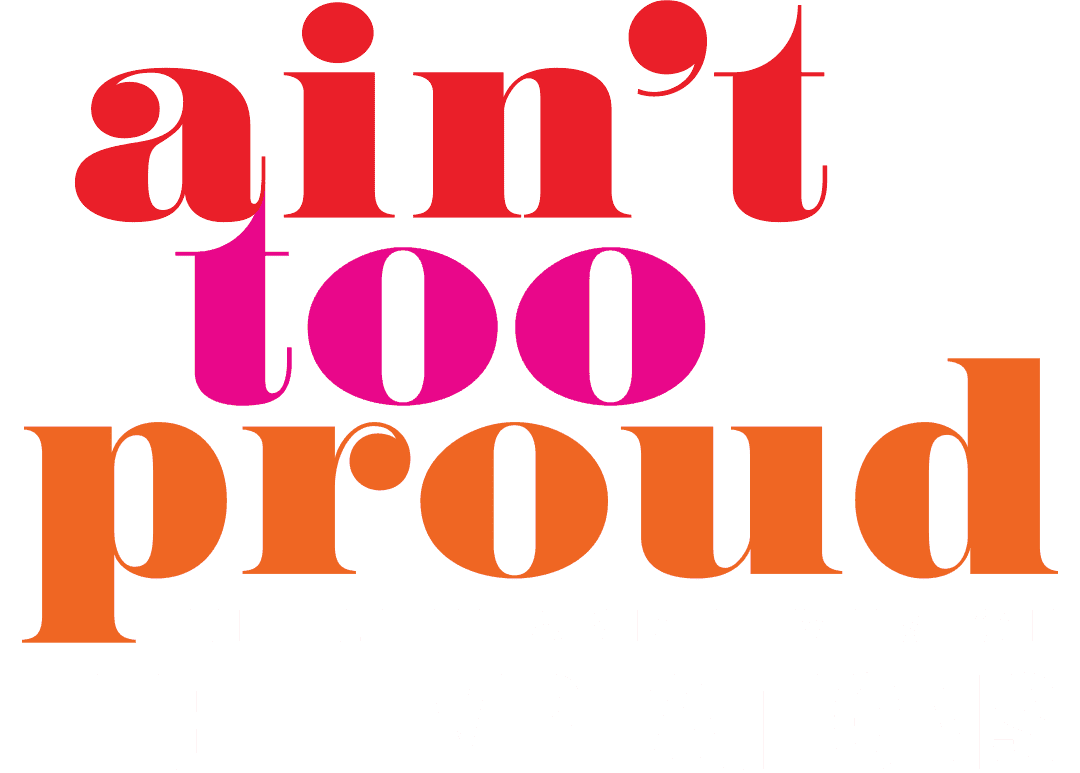 Ain’t Too Proud played its final Broadway performance on January 16, 2022. 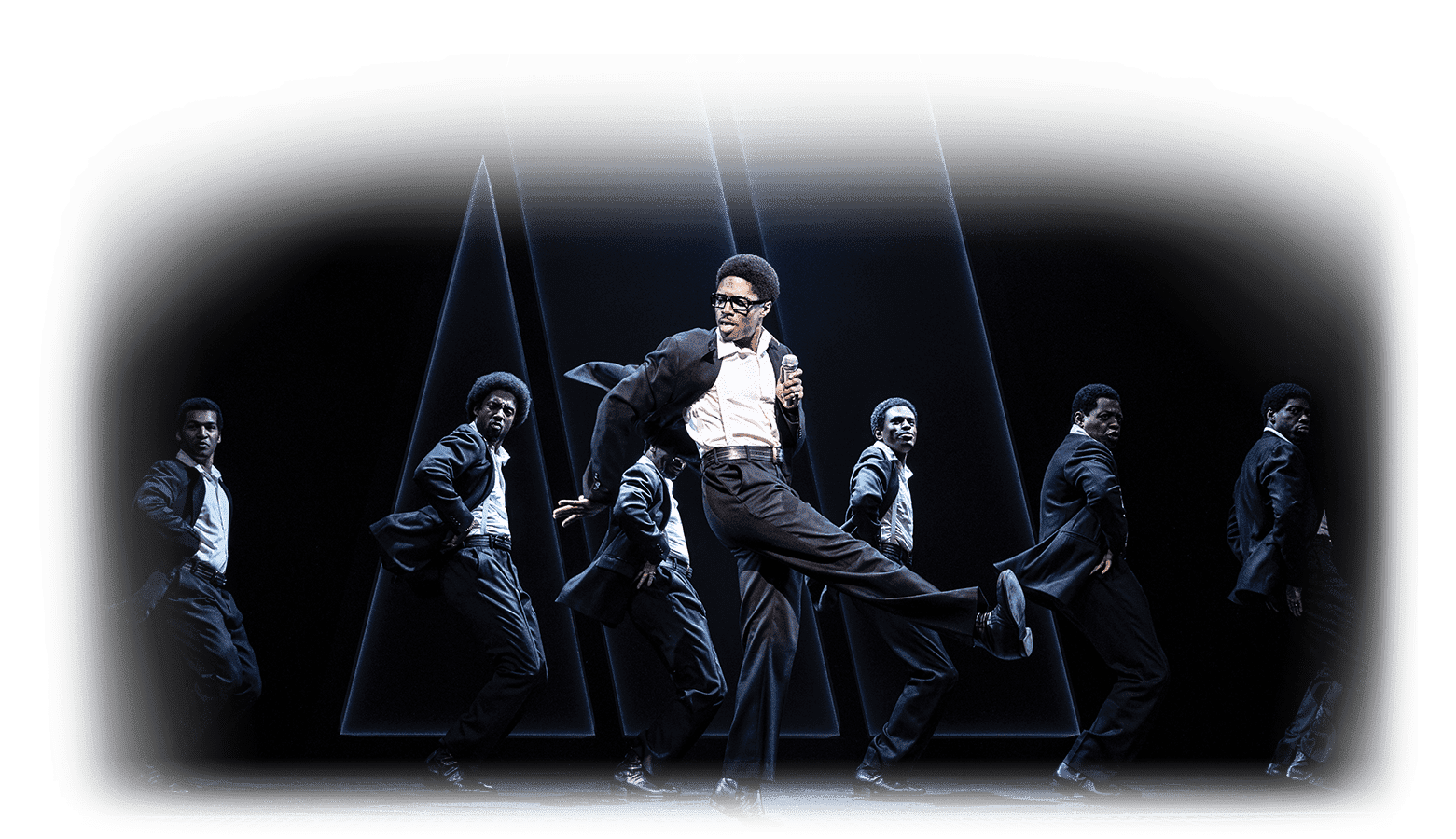 And a Sound That Would Make Music History.

AIN'T TOO PROUD is the electrifying new musical that follows The Temptations' extraordinary journey from the streets of Detroit to the Rock & Roll Hall of Fame. With their signature dance moves and unmistakable harmonies, they rose to the top of the charts creating an amazing 42 Top Ten Hits with 14 reaching number one. The rest is history — how they met, the groundbreaking heights they hit and how personal and political conflicts threatened to tear the group apart as the United States fell into civil unrest. This thrilling story of brotherhood, family, loyalty and betrayal is set to the beat of the group's treasured hits, including “My Girl,” “Just My Imagination,” “Get Ready,” “Papa Was a Rolling Stone” and so many more.

See what all the buzz is about JALEN HARRIS (Eddie Kendricks) is an accomplished singer, actor, and model, first discovered on Fox’s “American Idol.” Jalen has been seen and cast for many publications, television programs, and films like Fist Fight and HBO’s “Lovecraft Country.” He is also a former Simba standby actor for Disney’s The Lion King North American Broadway Tour. Jalen is the founding member alongside his brother Justin Cole, and lead singer of a prominent band based out of Memphis, TN called City Mix. Singing since the age of four, Jalen has grown into a passionate artist, always sharing his gratitude for his God given gifts.

HARRELL HOLMES JR. (Melvin Franklin). A native of Saginaw, MI. This triple threat is a graduate of AMDA. Making his tour debut, Harrell is a true throwback to the days of charismatic live bands and legendary soul artistry. His credits include “Star Search”, “American Idol”, and The Watching (film). He is a Motown Scholarship & Stevie Wonder Scholarship Winner. "Ever since I was 8 years old, I've wanted to be a Temptation, to now have that opportunity to bring their story to life is a dream come true."

MARCUS PAUL JAMES (Otis Williams) has been seen in Broadway’s Ain’t Too Proud: The Life and Times of the Temptations, MOTOWN: The Musical, Lin-Manuel Miranda's Tony Award-winning In The Heights, Jonathan Larson's Tony award-winning RENT. TV/Film credits include Collateral Beauty, "RENT : Filmed Live,” "The WIZ LIVE,” Oscar-nominated and Grammy-winning The Greatest Showman, tick tick… Boom Netflix, Dear Evan Hansen, In The Heights. As a recording artist, his albums are available on iTunes, CDBaby, and all streaming platforms. For more info visit www.marcuspauljames.com.

Brian C. Binion (Swing) is overjoyed to be a part of the ATP family telling the story of such an iconic group. His show credits include Broadway: Disney’s The Lion King. Regional: Kinky Boots, West Side Story, After Midnight, A Soldiers Tale, Man of La Mancha (UNCSA 2013) IG: @Bbinion13.

Lawrence Dandridge (Smokey Robinson/Damon Harris). Lawrence has a long list of performance credits headlined by his role of TJ in the second national Sister Act tour. Dandridge writes and directs original works with Aurway Repertory Theatre in NJ which he is the Co-Founder/Creative Artistic Director.

Treston J. Henderson (Swing) is a recent 2020 BFA graduate from Austin Peay’s Musical Theatre Program and he is so glad to be making his National Tour Debut with Aint Too Proud! He would like to thank God, Mom, Stepdad, family & friends for their continued support!! IG: @Treston.Henderson

Chani Maisonet (Swing) is so excited to be joining the Ain't Too Proud fam! (National Tour Debut). She is a vocal performance graduate of Kennesaw State University. Credits: Becoming Nancy & Ever After (Alliance Theatre). All the love to my family, friends, and all the honor to God. Let's groove!

Andrew Volzer (Swing, Assistant Stage Manager) is thrilled to be making his National Tour debut. Recent Credits: The Secret Garden (CCM), Glory Denied (Kentucky Opera), Junior Theater Festival (iTheatrics). He's a graduate of CCM with a BFA in Stage Management. He is grateful to his family and friends for all their love and support.

Music and Lyrics From

Based on the Book Entitled

The Temptations
by Otis Williams

Music by Arrangement with

PAUL TAZEWELL (Costume Design) has designed Broadway shows, theatre, film and television, dance, and opera for over 25 years. Starting his Broadway career with Bring in ’Da Noise, Bring in ’Da Funk directed by George C. Wolfe, he has since designed the Pulitzer Prize- and Tony Award-winning Hamilton; Escape to Margaritaville; Summer; In the Heights; The Color Purple (2005); Dr. Zhivago; Memphis; Caroline, or Change; Elaine Stritch at Liberty; Russell Simmons’ Def Poetry Jam; Lombardi; Magic/Bird; Side Show; A Streetcar Named Desire; Jesus Christ Superstar; Guys and Dolls; A Raisin in the Sun; and On the Town. In 2016, he received both a Tony Award®, for Hamilton, and an Emmy Award, for “The Wiz Live!” (NBC). Recent television work: “The Immortal Life of Henrietta Lacks” (HBO) starring Oprah Winfrey and “Jesus Christ Superstar Live in Concert” (NBC) featuring John Legend for which he received an Emmy nomination. He has been nominated for the Tony Award® six times, has received the Princess Grace Statue Award, Henry Hewes Design Award, two Lucille Lortel Awards, four Helen Hayes Awards, and the TDF Irene Sharaff Young Master Award. His costume work has been photographed for Vogue, Cosmopolitan, Rolling Stone, and The Bloomberg Design Issue, and he is a featured artist in The Metropolitan Museum of Art’s web series The Artist Project and the companion book by Phaidon. He currently lives in New York City with his husband and their dog, Harpo.

EDGAR GODINEAUX (Associate Choreographer) was the associate choreographer for the Tony Award-winning musical Memphis, which received the Olivier Award for Best Choreography for Memphis UK, and was the director/ choreographer for Memphis at Musical Theatre West and the Flashdance: The Musical national tour. His film credits include Idlewild featuring OutKast and Bolden. His TV credits include “So You Think You Can Dance” (Canada) and Motown’s 30th anniversary broadcast. He performed in “Dancing with the Stars’” Michael Jackson tribute, “Glee”, and Broadway’s Swing, Aida, and Dance of the Vampires. He has toured with Michael Jackson, Mariah Carey, and Diana Ross. Edgar is the choreographer of the upcoming Nat King Cole musical Lights Out! Last but not least my children Pierce and Lennox for giving me the strength and courage that I need.

Music Supervision and Arrangement by

DES McANUFF (Director) is a two-time Tony Award-winning director and former Artistic Director of the Stratford Festival. Broadway: Summer, Doctor Zhivago, Jesus Christ Superstar, Guys and Dolls, Aaron Sorkin’s The Farnsworth Invention, Jersey Boys (Tony and Olivier Awards for Best Musical), Billy Crystal’s 700 Sundays (Tony Award for Best Special Theatrical Event), Dracula, the Musical, How to Succeed..., The Who’s Tommy (Tony and Olivier Awards for Best Director), A Walk in the Woods, Big River (Tony Awards for Best Director, Best Musical). Selected New York: Fetch Clay, Make Man (NYTW). Opera: Faust (Met, ENO). Film: Cousin Bette (director), Rocky and Bullwinkle (director), The Iron Giant (producer, BAFTA Award), Quills (executive producer). He is also Director Emeritus of La Jolla Playhouse, where during his tenure as Artistic Director, he staged more than 35 productions of classics, new plays, and musicals. Under his leadership, the Playhouse received the Tony Award for Outstanding Regional Theater. Raised in Canada, he was a part of the Toronto alternative theatre scene in the 70s. While at Stratford, he directed multiple productions including A Word or Two, The Tempest, and Caesar and Cleopatra (all starring Christopher Plummer), Tommy, Jesus Christ Superstar, Twelfth Night (starring Brian Dennehy), ...Forum, As You Like It, Macbeth, and Romeo and Juliet. In 2006, he received the prestigious Julia Hansen Award for Excellence in Directing and in 2011, he was honoured with a doctorate from Ryerson University where he attended the Theatre School. In 2012, he was awarded Canada’s esteemed Governor General’s National Arts Center Award and the Order of Canada. 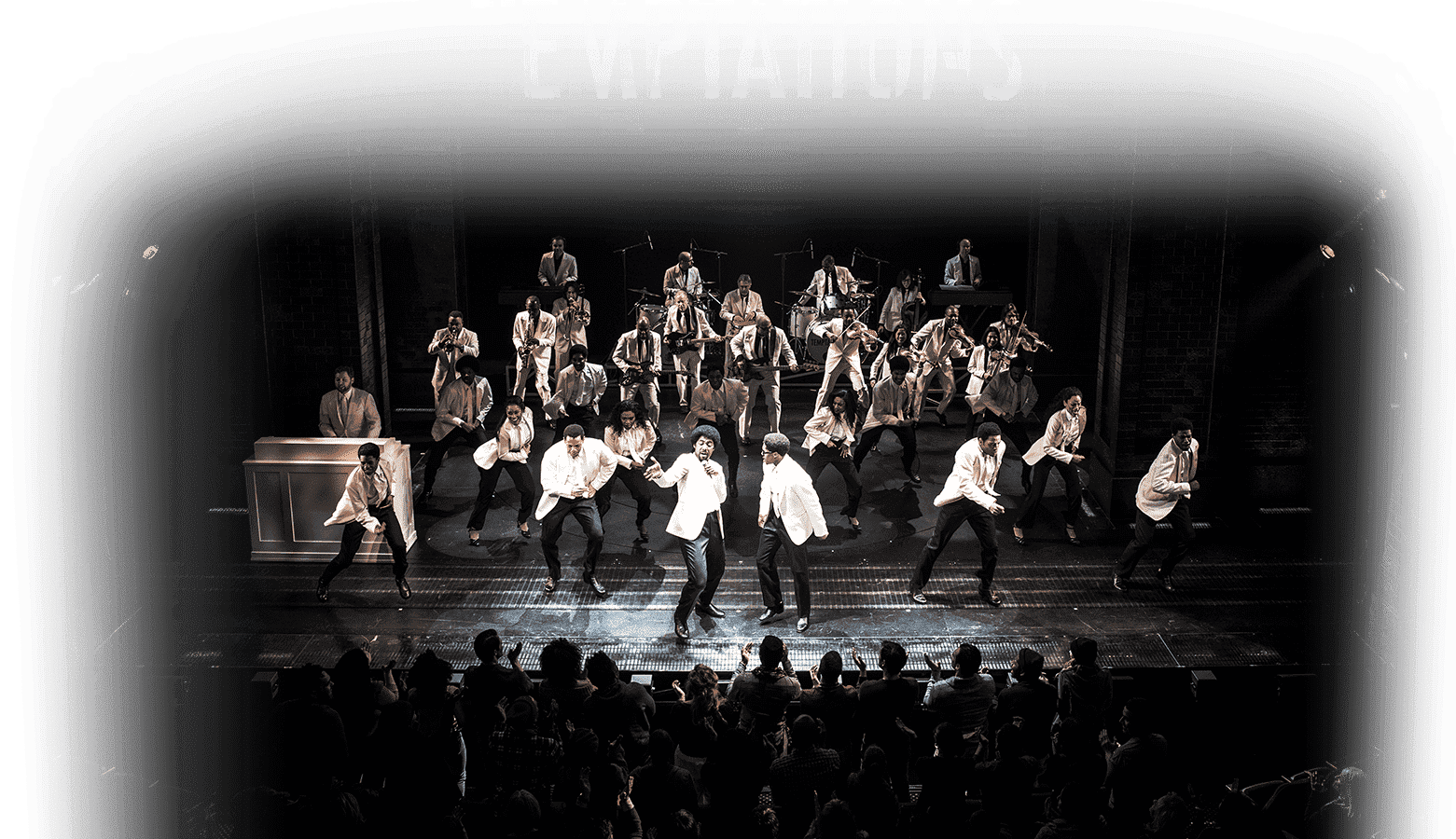 Your privacy is important to us. To better protect your privacy, we provide this Privacy Policy explaining our online information practices and the choices you can make about the way your information is collected and used.

THE INFORMATION WE COLLECT

THE WAY WE USE INFORMATION

When you register for the AIN’T TOO PROUD mailing list to receive updates, we use the information you provide about yourself only to complete that request. We do not share this information with outside parties except to the extent necessary to complete that request. We use return email addresses to answer the email we receive. Unless the same email addresses have been used to register for the AIN’T TOO PROUD mailing list, such addresses are not used for any other purpose and are not shared with outside parties. We use non-identifying and aggregate information to better design our website and to share with advertisers. For example, we may tell an advertiser that X number of individuals visited a certain area on our website, but we would not disclose anything that could be used to identify those individuals.

A cookie is a small piece of information sent by a website or its service provider that is saved on your hard drive by your computer's browser. Almost all websites utilize cookies to one extent or another. The AIN’T TOO PROUD website uses its cookies along with various ad retargeting and tracking. Users receive cookies from these partners when they visit torchsongbroadway.com and/or when they visit one of partner advertisers' websites. Partners only collect information for the use of serving retargeted ads, advertising purposes and custom audiences. Any partner found in violation of this policy will immediately be removed. Finally, we never use or share personally identifiable information provided to us online in ways unrelated to the those described in this Privacy Policy.

The Google Analytics tracking code used on this site allows AIN’T TOO PROUD to track Google Analytics Demographics and Interest Reporting. This data allows a better understanding of who our users are and how converting and non-converting users differ. These demographic and interest categories are also used to target ads on the Google Display Network. Using Ads Settings (https://www.google.com/settings/ads), users can opt-out of Google Analytics for Display Advertising and customize their Google Display Network ad settings.

OUR COMMITMENT TO DATA SECURITY

To prevent unauthorized access, maintain data accuracy and ensure the correct use of information, we put in place reasonably appropriate physical, electronic and managerial procedures to safeguard and secure the information we collect online. Should you elect to register for the AIN’T TOO PROUD mailing list, your email address will be stored within a third-party communication system – MailChimp. Though MailChimp's servers are located in the United States of America. MailChimp has stated that it is committed to achieving compliance with the European Union's General Data Protection Regulation (GDPR), which requires that all data subjects be notified within 72 hours of discovery of a data breach.

Should you have other questions or concerns about this Privacy Policy, please send us an email us at [email protected].